ABU DHABI, INTER CHANNEL: ONE ON ONE WITH BENITEZ/3

The coach's interview with Edoardo Caldara and Roberto Scarpini on Sky Italia, channel 232

ABU DHABI - Wesley Sneijder's injury, Maicon's chances of making Saturday's final, getting back to league business in January: three more topics touched on by Rafael Benitez in his interview being shown on Inter Channel at 21:00 this evening. It was a chance for the fans to put questions to the Nerazzurri coach - more than 1000 messages arrived in less than 24 hours. Hosts Edoardo Caldara and Roberto Scarpini spoke to Benitez in Inter's hotel in Abu Dhabi, where he is preparing the team for Saturday's FIFA Club World Cup final.

inter.it exclusively brings you the third part of Benitez's interview, before it is aired on Inter Channel.

SNEIJDER. "I'm really sorry for Wesley. He had been working so hard and was desperate to impress in this competition. At the end of yesterday's training session I saw him looking for a physio and asked what the problem was. They told me he'd just felt a bit of a muscle twinge. Then unfortunately he was challenged hard from behind right on that spot just seconds into the game: it was bad luck. It's too early to say when he will be back. In these cases you have to wait a few days to see how the muscle reacts. But of course he won't make the final. We'll have a look at him when we start training again after the Christmas break."

MAICON. "To be honest I prepared for the semi-final expecting Maicon to be on the pitch, but yesterday he told me his muscle felt a bit hard. When I looked him in the eyes I understood that it wasn't worth the risk. Today he trained well, though, and at the end of the practice match he was annoyed when a move broke down - he wanted to win. I'm confident he'll be ok for the final."

SCUDETTO. "I don't think AC Milan are too far ahead. We can make up the ground: it's been done plenty of times since they introduced three points for a win. You just need to put a run together, win three or four on the bounce at the right time and suddenly it all looks very different. At the moment we're focused on the Club World Cup because we're determined to do well and win it. We'll worry about the league in January, but I think that with all or most of our players available we can win the Scudetto. The injuries have cost us recently: competition for places is healthy for the team because it keeps everyone on their toes and ultimately makes the side more successful." 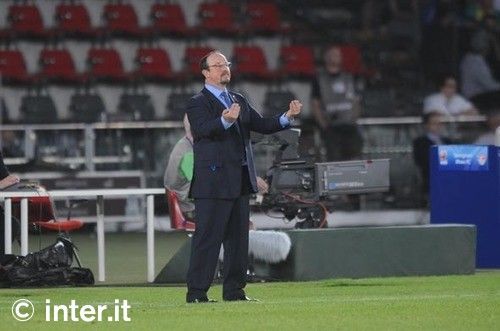 Next
Abu Dhabi: the eve of the final, good morning Inter!

team Read
Load More
inter-academy
A new chapter for the Inter Academy in Brazil: the partnership with IT.SPORTS gets underway
inter-campus
Inter Campus and UEFA Foundation, a new project for Africa
Almost done...