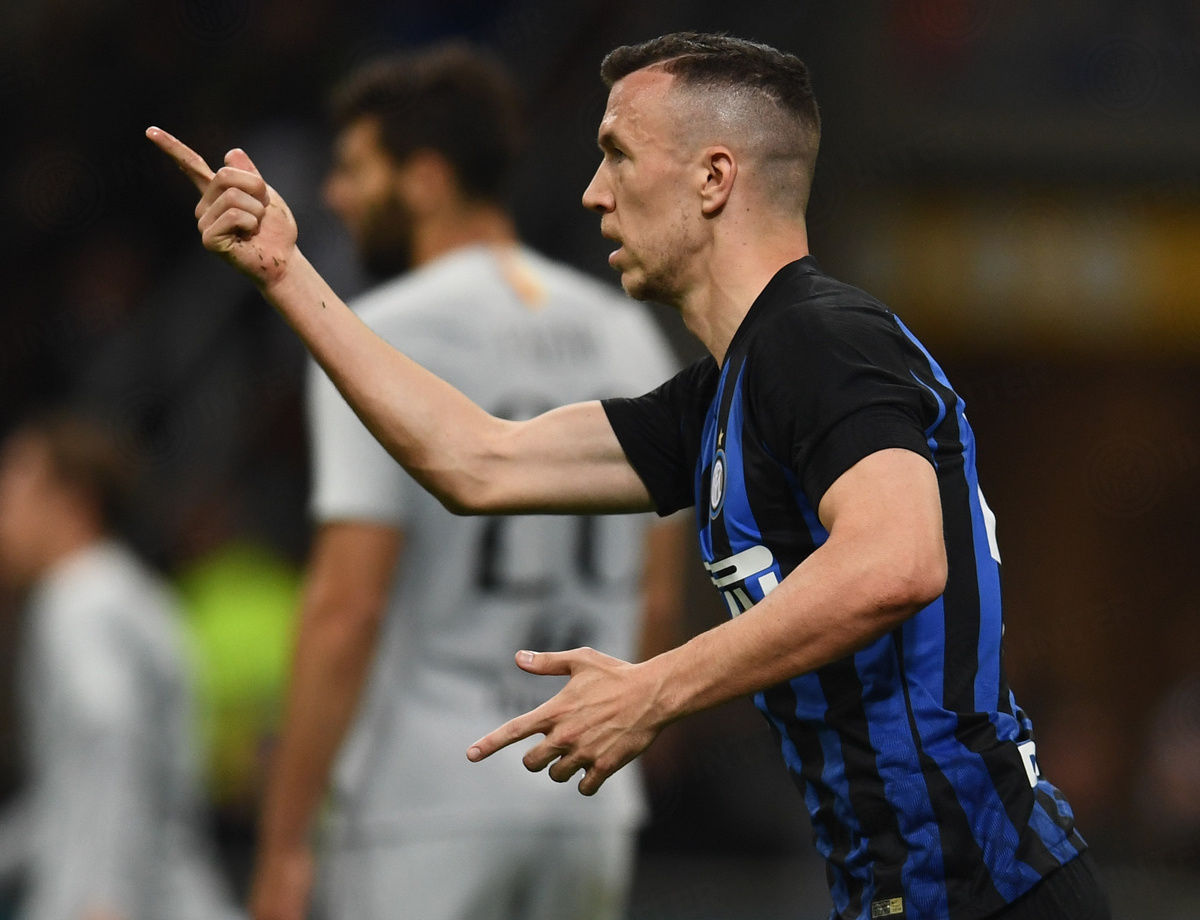 PERISIC SCORES TO PEG ROMA BACK, 1-1 AT SAN SIRO

A goal apiece in the matchday 33 clash in Serie A TIM, Nerazzurri stay third on 61 points

MILAN - The big fixture on matchday 33 in Serie A TIM in front of over 60,000 fans at San Siro finished with the points shared. El Shaarawy netted in the first half before Perisic responded in the second. The result keeps the Nerazzurri third with five matches to go on 61 points and with a six-point lead over fifth (while waiting for Monday’s match between Napoli and Atalanta).

Things got off to a lively start. In the third minute, Kolarov picked Dzeko out with a low ball but his shot was too weak to trouble Handanovic. Three minutes later, Kolarov let fly with a powerful hit from the edge of the area that went just wide of Handanovic’s goal. Inter responded in the eighth minute, Politano crossed to Lautaro but Mirante did brilliantly to tip his header onto the post, before Florenzi blocked from Perisic on the follow-up. Roma broke the deadlock in the 14th minute. El Shaarawy cut in from the left and found the corner with a right-footed curler, leaving Handanovic with no chance. The Giallorossi started to sit deeper after taking the lead, conceding possession to Inter but the hosts struggled to create many chances. In the 33rd minute, El Shaarawy looked dangerous once again with a left-foot shot that Handanovic kept out. In the 37th minute, Vecino missed the target with his header from a Perisic cross. Inter were pressing hard at the end of the half, first with Asamoah after some great individual play but his deflected shot went just the wrong side of the post. Then, Mirante saved from Politano before D’Ambrosio headed into the side-netting from a great position. The half-time whistle blew with Roma a goal up.

Inter came out for the second half in an aggressive fashion. In the 47th minute Asamoah found Nainggolan after a great piece of play down the left, but the Belgian’s strike was blocked by the Roma defence. Two minutes later, Lautaro’s header ended up in the arms of Mirante following Politano’s cross. Roma responded shorly after: Zaniolo, on in Under’s place, played the ball out wide for Pellegrini, who then entered the penalty area and shot wide with his left foot. Spalletti then made his first change of the match as Nainggolan was replaced by Icardi. The tactical change made immediately paid off as Perisic got on the end of D’Ambrosio’s cross from the right and headed home to bring the Nerazzurri level. Inter continued to press after this: Juan Jesus got in the way of Icardi’s effort before Perisic fired a free kick narrowly over. After 68 minutes, Pellegrini’s strike was saved by an alert Handanovic as Roma looked to ease the pressure. Inter then came close to getting a second goal: Lautaro escaped his marker but could only fire over following Vecino’s ball across the box. Spalletti then shook things up once more as he brought on Joao Mario and Keita for Lautaro and Politano. However, it was Roma who nearly won it in the 90th minute, with Handanovic having to produce an excellent stop to deny Kolarov. After three minutes of added time, the final whistle was blown with the score at 1-1.

The road to the Champions League will continue next week, with Juventus set to be the next visitors to San Siro.

Next
Borja Valero: "We've still got to fight"