Football is about dreams. But there can be a high price to pay for those that follow them – it can mean leaving home, leaving your family, leaving your mum and dad behind at the age of just 11. It might be the biggest opportunity you’ve ever had, but when you’re 11 years old you’re allowed to miss home all the same.

Born on 13 August 1994, Joaquin Correa’s call from River Plate did indeed come when he was just 11 years of age. And so it was that he left his hometown, Juan Bautista Alberdi, a city named after one of Argentina’s most famous intellectuals, in the province of Tucuman.

After just one season, he was back home again. But that wasn’t going to be the end of it – because the dream of growing up to become a professional footballer was just too great.

At the Renato Cesarini football school in Rosario, everyone could see that there was something special in Joaquin. He duly drew the attention of another big name: Estudiantes de la Plata. It was the start of everything for Tucu – the nickname based on the region he was born in. Between 2006 and 2011, Joaquin rose up the ranks at Estudiantes, the club where former Inter star and Argentine legend Juan Sebastian Veron was still plying his trade.

He made his debut at the age of just 17. On 19 May 2012, Correa officially became a team-mate of Veron when he came on for Duvan Zapata in a 3-0 away win over Banfield. Tucu spent four years in the Estudiantes first team before heading for Europe and Sampdoria. After 18 months with the Blucerchiati, Correa signed for Sevilla, where we would win his first cap for the Argentina national side.

Then came Rome, and Lazio. Tucu excelled, improving his goal return with every passing season – nine the first year, ten the next, eleven in the last campaign. Perhaps the most important of the 30 goals he scored for Lazio was his strike in the 2-0 Coppa Italia final win over Atalanta, in 2019. In total, Correa made 117 appearances for Lazio, earning regular call-ups by Argentina along the way.

In October 2020, he scored a historic goal in a World Cup qualifier in La Paz to wrap up a 2-1 win for Argentina over Bolivia – his country’s first win in Bolivia for 15 years. Fate would have it that the other goal was scored by Lautaro Martinez, who also set up Tucu’s goal. The two forwards were both part of the squad that tasted Copa America glory in the summer of 2021. 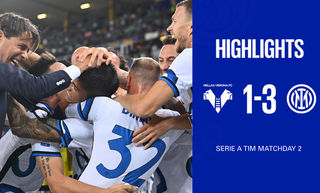