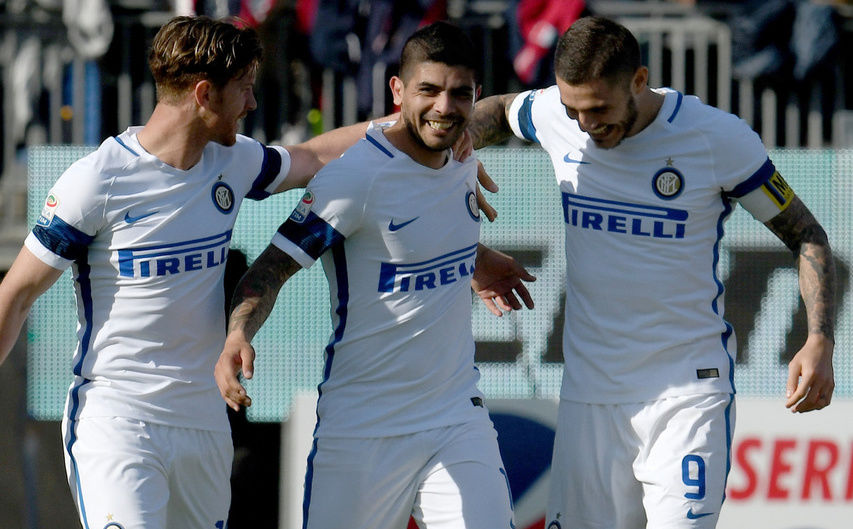 The Nerazzurri pile on the goals at the Stadio Sant'Elia this afternoon: two from Perisic and one each from Banega, Icardi and Gagliardini

CAGLIARI – Inter were in imperious form this afternoon, dispatching Cagliari 5-1 on their home turf and returning to winning ways after last week's disappointment.

Stefano Pioli's players simply had too much firepower for the Sardinians to handle, with the four attacking players Antonio Candreva, Ever Banega, Ivan Perisic and Mauro Icardi creating and scoring seemingly at will.

The Nerazzurri lined up in a 4-2-3-1 formation and spent the first few minutes sizing up their opponents, aware of their decent record at home so far this season. Indeed, when Joao Pedro lobbed Samir Handanovic in the sixth minute, it looked as if it was going to be a tough afternoon. Luckily, Gary Medel had read the situation and got back in time to clear with a bicycle kick off the line.

The chance appeared to jolt the visiting team into life and openings began to flood the Nerazzurri's way, with Geoffrey Kondogbia in particular behind a string of chances that he couldn't manage to convert.

Around the 20-minute mark, Inter upped their pressing and there was a feeling the Cagliari rearguard display was about to give in. In the 25th minute, Perisic burst down the left wing and put in a low cross that made it to the far post, where Icardi struck narrowly over on the slide. Five minutes later, Kondogbia went closer still, his header tipped onto the bar by goalkeeper Gabriel.

The Nerazzurri weren't made to wait for much longer and, in the 34th minute, Banega popped up in the classic No.10 position, where he dinked a beautiful ball between the opposing centre back and right back. Perisic read the Argentine's intentions and beat the offside trap to steer home.

Banega went from assist-maker to goalscorer shortly afterwards. A Cagliari defender handled a long-range effort from Danilo D'Ambrosio in the 39th minute and the referee awarded a free-kick in an ideal position for the Nerazzurri No.19's left boot. Banega duly obliged, curling a sweet strike into the top corner.

Just when Inter thought they were going to have it all their own way, Massimo Rastelli's men suddenly came back into it. First Handanovic was forced into a last-ditch save when Davide Di Gennaro tried to catch him off-guard with a free kick from a narrow position and then Nicolo Barella lofted a cross for Marco Borriello to guide into the bottom corner and halve the deficit.

Aware that the next goal was crucial in this contest, Inter could hardly have made a better start to the second half. Just two minutes after the restart, Icardi laid the ball off to Perisic, who curled it around Gabriel's outstretched fingers and into the net to restore his side's two-goal lead.

Despite a few half chances here and there for Cagliari, mainly through Joao Pedro, Inter were in comfortable control of the game. The fourth goal came in the 67th minute when Gabriel felled Icardi in the area, leaving Marco Di Bello with no choice but to point to the spot. The skipper stepped up to take the penalty, sending the Cagliari keeper the wrong way in convincing style.

With Perisic and Banega having done more than their fair share this afternoon, Pioli decided to freshen things up by sending on Eder and Joao Mario in their places respectively. The Portuguese midfielder had an immediate impact on the game, bursting into the area and squaring for Icardi, only for Inter's No.9 to slam his shot onto the bar.

In the dying moments of the game, the icing on the cake was provided by Roberto Gagliardini, who, receiving the ball 25 yards out, struck a low, unerring drive into the bottom corner for his first Serie A in a Nerazzurri shirt. The perfect end to a great afternoon for the side.