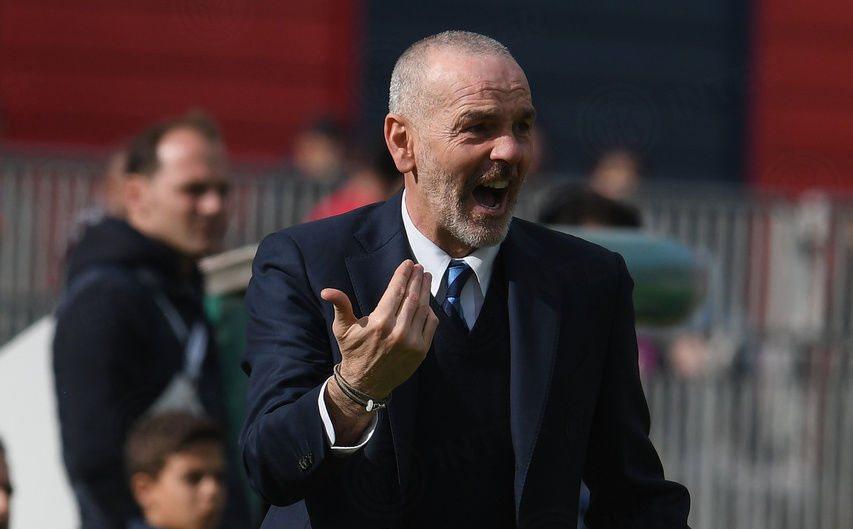 Here's the coach's view of his team's thrashing of Cagliari today: "We wanted to bounce back immediately. Third spot won't be easy but we're Inter"

MILAN – A 5-1 victory away from home is music to the ears of any football coach and Stefano Pioli is no exception.

"It was important to bounce back immediately," he began after the final whistle at the Stadio Sant'Elia this afternoon, "showing that we've learned from the mistakes we made last week. We created a lot of chances and had more than 20 efforts on goal. Maybe we could have given them fewer opportunities, but we deserved to win this game and had the right attitude throughout.

"This victory is an important statement, although we know we must keep at it and continue to improve because we've got an even trickier task in store for us next week against Atalanta.

"Everyone is aware we need to up our level and constantly try to produce more in order to grow and develop a winning mentality. We're working with that in mind and the statement we've given this week – forgetting all the gossip – is crucial.

"This squad is working on its strengths and weaknesses, trying to get better game by game. We've got our momentum back and we'll try to maintain this until the end of the season because we are Inter. We know it won't be easy, but let's try to win as many matches as possible – every single one of them is key for us.

"The rumours on my future? I know full well the team I'm coaching; the criticism doesn't matter to me because I'm working purely for the good of Inter. I've always had the support of the club and senior management. We're trying to build something for the future, but we have to focus our thinking on the present because there's a season to finish in the best way possible by consistently chalking up results.

"Looking at the quality we have, we could have managed the game better after our third goal. You can't let yourself get into certain situations against other teams, so from here on in we have to develop in these areas. The squad is confident and is working in the right way. I'm coaching an intelligent, talented squad, and I'm very pleased to be doing so."

Finally, he praised Argentine playmaker Ever Banega for his performance and answered questions on Inter's best formation.

"Was Banega decisive? He's got quality, is able to move between the lines and can create danger with his forward passing. He did that very well today.

"As for whether we're better with four at the back, we don't have anything set in stone. Since I've been here, we've used two formations, both adapted to the attributes we have. We make a decision on the best formation ahead of every match, fully aware that your approach is more important than how you set up.

"I opted not to bring on Gagibol," he concluded. "I would have liked to make an attacking change for my third substitution, but I was forced to send on [Yuto] Nagatomo because [Cristian] Ansaldi and [Danilo] D'Ambrosio was both tired."

Next
Icardi: "We had to get straight back up"

Gosens: “I’m proud to be here and can’t wait to get started”

Barella: starting out, his idol, coming through the ranks, and Inter