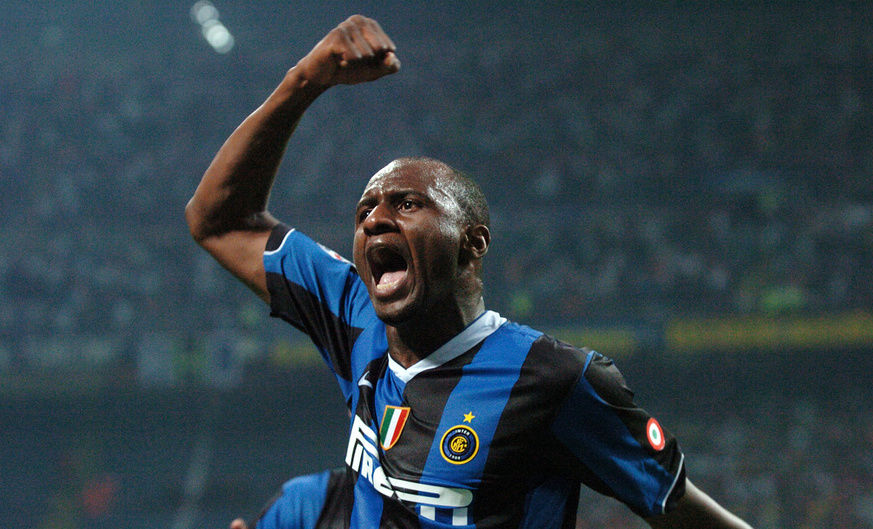 Titles in the Premier League and then in Italy before becoming a coach: celebrating the Frenchman’s career on his 41st birthday

MILAN – Watching Patrick Vieira play was often a puzzling experience: to look at him, that long-legged 193cm frame, you might think he wasn’t blessed with remarkable ability or close control. But when the ball arrived at his feet, or more often than not he won it back himself, it was a completely different story.

From the south of France to Highbury in London and eventually on these shores in the black-and-blue of Inter at San Siro, fans learned to expect the full package from Vieira: crunching tackles, towering headers, but also inch-perfect passes, spectacular goals and his unmistakable rangy running style, eating up the turf before him.

His long stride was mirrored in the huge leaps he made in his life and playing career from young hopeful to ultimately defining his position on the pitch. This first happened when he was just eight years old and took him from Dakar in Senegal, where he was born on 23 June 1976, to France.

In Trappes and then Dreux in the country’s north, the youngster felt compelled to kick something and so his love affair with football started, first at local clubs before he was snapped up by Tours FC. At 15 years old, already possessing a formidable physique, there were some who feared he’d find it difficult to keep those long legs under control. However, before anything else, Patrick played the game upstairs and understood the sport like few others of his age.

It was this quality that caught Cannes’ eye and the club on the French Riviera invested heavily in the young midfielder’s development, bringing about the next big leap of his career – to AC Milan in Italy. On the rare opportunities afforded to him in Fabio Capello’s team during the 1995/96 season, Vieira didn’t manage to properly stake his claim and was forced to move elsewhere. His chance came at the hands of Arsene Wenger, newly appointed manager at Arsenal, who was impressed by Patrick’s displays in France.

The fit between coach and player felt perfect and Vieira stayed in London for nine seasons, turning from a promising talent to the complete central midfielder. For the following 15 years, he would represent the pinnacle of his position. The heartbeat of a glorious side, he broke up play, created chances and often finished them off himself. In total, he scored 57 goals for the Gunners in almost 500 appearances, many of them as captain. It was an extraordinary period for Pat, who added the 1998 World Cup and Euro 2000 with France to his list of honours.

Once his tenure at Arsenal came to an end, he opted to return to the place he had left unfulfilled: Italy. Capello’s Juventus went in for him in 2005, but once again he only spent a season under the veteran coach’s tutelage. After the Bianconeri were relegated, Vieira still yearned for top-flight football and decided upon Inter, then just at the dawn of one of the most successful eras in the club’s history.

The Frenchman’s charisma and experience was vital in helping to forge together a group of players that was hungry for trophies and, in fact, they started to roll in almost immediately. A brace on his club debut in the Italian Super Cup against Roma was crucial in overturning a 3-0 deficit to win 4-3. It was the first piece of silverware in a season that ended with the Nerazzurri’s 15th Scudetto.

He picked up many more titles at Inter before returning to Manchester City in the Premier League, where he made his first tentative steps into coaching. Now he commands the dugout at New York City FC in the United States.

On his 41st birthday, everyone at Inter wishes Patrick the very best of luck on his latest leap forward. We are quite convinced it won’t be the last.