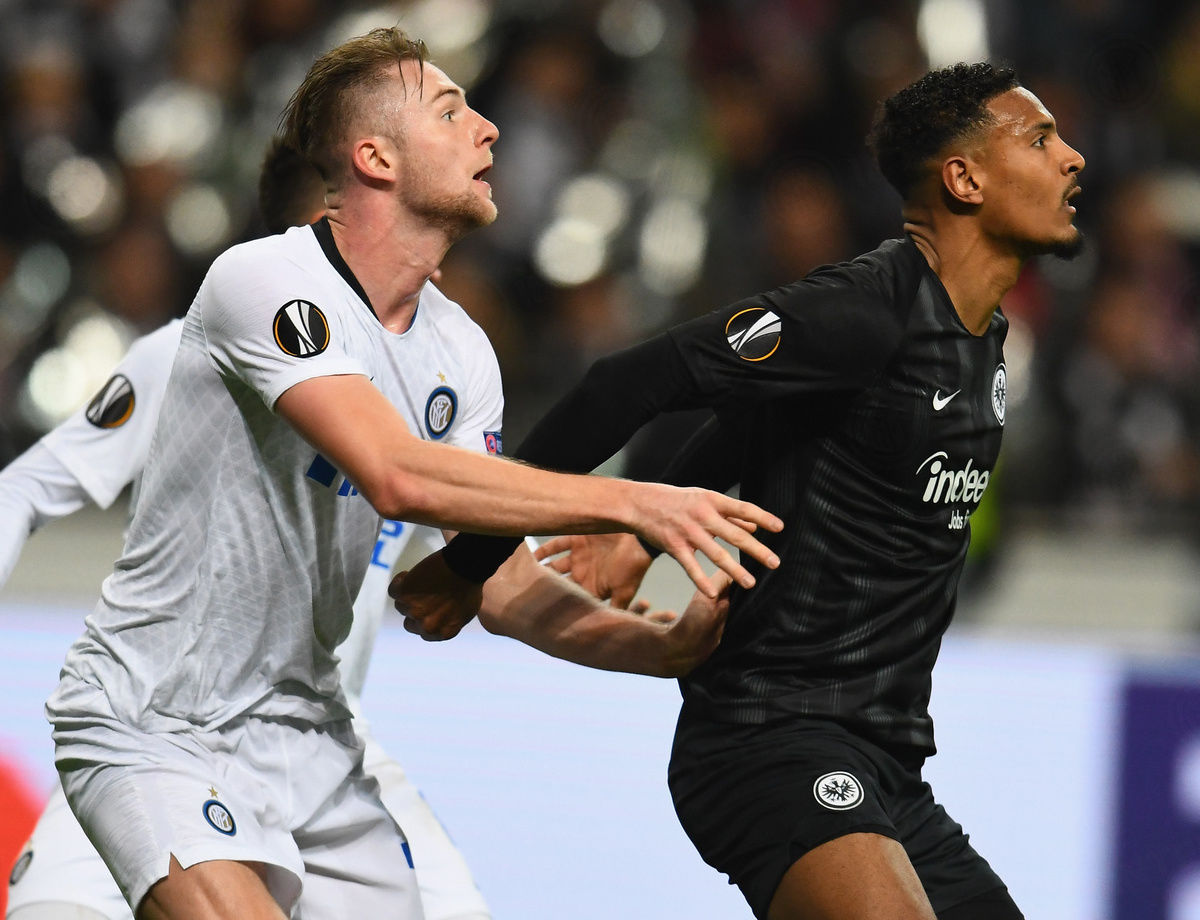 EINTRACHT 0-0 INTER, NO GOALS IN FRANKFURT

FRANKFURT- Inter pushed in the first half and hung on in the second as it finished goalless at the Waldstadion in Frankfurt. The first leg of the Round of 16 tie in the Europa League between the Nerazzurri and Eintracht finished goalless and it’s all to play for now in Milan. The main regret for Spalletti’s side is not capitalising in the 22nd minute when Brozovic’s penalty was saved.

Inter started the game very well and were dangerous in the second minute when N’Dicka was alert to deal with a two-on-one situation in the German box before Lautaro and Politano could make the most of Perisic’s cross. D’Ambrosio tried to press the issue with two chances. In the fourth minute, his left-foot effort was saved by Trapp. In the eleventh minute, he just failed to get on the end of a Politano free kick after the ball glanced off De Vrij. In the 16th minute, the hosts were on the attack with a long shot by Jovic that missed the target. Inter’s best chance came in the 21st minute when the referee awarded a penalty for a collision between Lautaro and Fernandes. Brozovic stepped up to take it but Trapp dived away to his left to make the save. Spalletti’s side continued to show character and while looking to control the game. In the 28th minute, Perisic was unable to pick out Latuaro who was in space. Eintracht had another chance in the 30th minute when Kostic found Jovic in the area but his left-foot effort was blocked. The final chance of the half fell for Inter in the 40th minute when Politano whipped in a cross but Vecino didn’t get enough on the header and it sailed wide and so it was 0-0 at the break.

The home side raced out of the blocks for the second half, with Hinteregger forcing a central save from Handanovic in the 49th minute from a corner. Just minutes later, Eintracht were up in arms after a collision in the box between D’Ambrosio and Haller, although the referee decided to wave play on. Handanovic was called into action once again in the 55th minute to keep out a Jovic header, while Spalletti was then forced into his first change just a few minutes later. An injured Perisic was the man to make way, with Candreva coming on in his place. The hosts soon began to ramp up the pressure and in the 61st minute, Da Costa tested our Slovenian shot-stopper with a header after a set piece.

Unrelenting in their attacking play, Hinteregger missed a fantastic chance to break the deadlock in the 70th minute as he fired a close-range header just wide. The Eintracht defender was involved once again not long after, forcing a strong diving save from Handanovic from long-range. With ten minutes to go, Spalletti sent on Cedric to replace Borja Valero. However, the story of the match remained largely the same, with substitute Paciencia and Jovic forcing Handanovic into yet more saves. As the clock struck 90, Handanovic produced a strong stop to halt a stinging strike from Gacinovic before the final whistle was then blown after three minutes of injury time. With the two-legged tie finely poised at 0-0, the return match now awaits at San Siro in seven days' time.

Meanwhile, the Nerazzurri will be back in action this Sunday against Spal at San Siro (15:00 CET).

Next
De Vrij: "It's important not to have conceded"

Get in the mood for Venezia v Inter