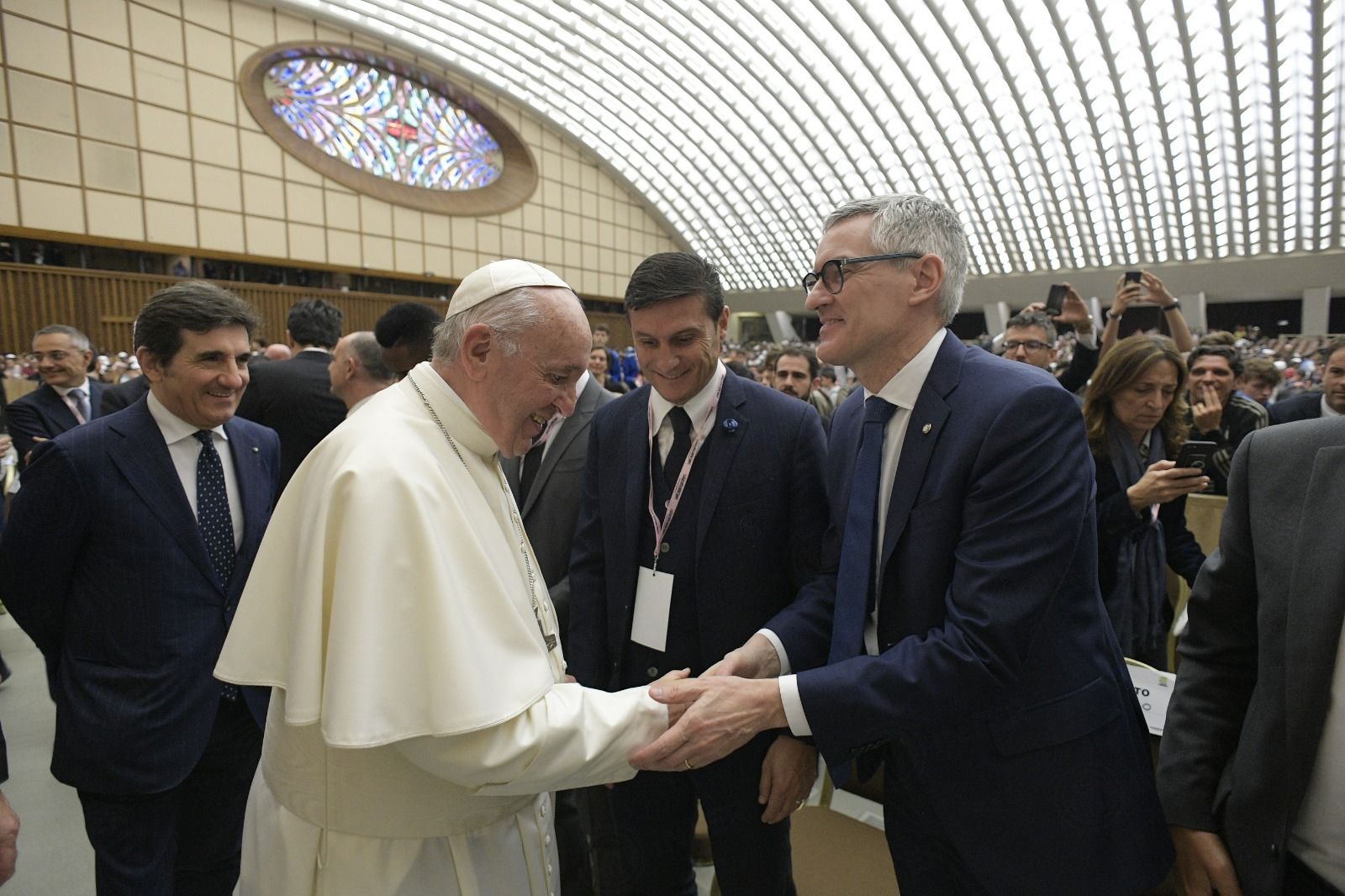 VATICAN CITY – At the Paul VI Audience Hall in Vatican City, the event ‘Il Calcio che Amiamo’ (‘The Football that we Love’) took place this morning. Organised by La Gazzetta dello Sport, it sought to highlight the crucial values of Football and Sport in general: inclusion, education and enjoyment.

Under the direction of Cristina Fantone and in a hall packed with over 5000 youngsters from Youth Sectors and football schools throughout the country, interviews were carried out with Roberto Mancini, Gaetano Miccichè, Franco Baresi, Giovanni Malagò, the Minister of Education, University and Research Marco Bussetti, Carolina Morace, Arrigo Sacchi, Clarence Seedorf, Gianluca Pessotto, Gabriele Gravina, Claudio Ranieri, Samuel Eto'o, Andrea Monti and the captain of Italy’s amputee side Francesco Messori.

Upon the focus of the debate turning to inclusion, Inter’s Vice-President Javier Zanetti took the floor: “I’m delighted to see so much enthusiasm in these children. The fight against racism is a sensitive topic that requires full commitment from all of us. The concept of inclusion has been imprinted in the Club’s DNA ever since it was founded. A few months ago, Inter decided to intervene in a concrete way by launching the BUU – Brothers Universally United campaign – this was a really strong message to all fans throughout the world and one which we continue to spread. For many years, we’ve been involved in projects promoting inclusion through Inter Campus on a worldwide scale and many other initiatives in Italy, both at a local and national level. Football is a fundamental tool and is found everywhere, so we need to use it to transmit such crucial and universal values. During my long career, I’ve seen numerous examples of positive support at San Siro. I’ve seen opposition teams and players being applauded. Everyone needs to feel equal and we need to remain united to combat racism.

An incredible moment occurred when Andrea Monti, the director of Gazzetta dello Sport, made the whole hall shout ‘BUU’ in unison. 5,000 voices could be heard in the immense Paul VI Audience Hall, all of which were supporting the Nerazzurri’s campaign. Among others, Inter’s CEO Alessandro Antonello, Elite Academy Head Roberto Samaden and RCS and Torino FC President Urbano Cairo also attended. The Nerazzurri’s U13 side INTER SS Romulea were also present along with President Nicola Vilella.

The event concluded with the thoughts of His Holiness, Pope Francis: “Dear brothers and sisters, good day to you. I would like to offer my greetings to you all. Behind a rolling ball you’ll always find a youngster following it. Sport provides a great opportunity to learn how to do your very best with commitment and sacrifice – but above all not on your own. The ball needs to become a means to get closer to people – real, not virtual, people. Football is a team game. I think it’s the best game in the world, but this is just my personal opinion. Playing football makes you happy and allows you to express your freedom. It allows you to pursue your dreams without necessarily having to become a champion. Football provides an opportunity to develop. I would like to highlight the important role that coaches have, you’re a valuable information source for your youngsters. May you always help to put smiles on the faces of your athletes. There was someone who said that they walked on tiptoes on football pitches so as to not trample on the dreams of youngsters. This is also a message for our professional athletes: don’t forget where you’ve come from, from that pitch in the suburbs or that youth club. Leading a great life is a victory for everyone. Be sure to guard the pleasure that the game brings. I bless you all and ask you to put your hands in prayer.”

Next
Handanovic and Inter Women to be honoured at San Siro prior to Inter vs. Empoli