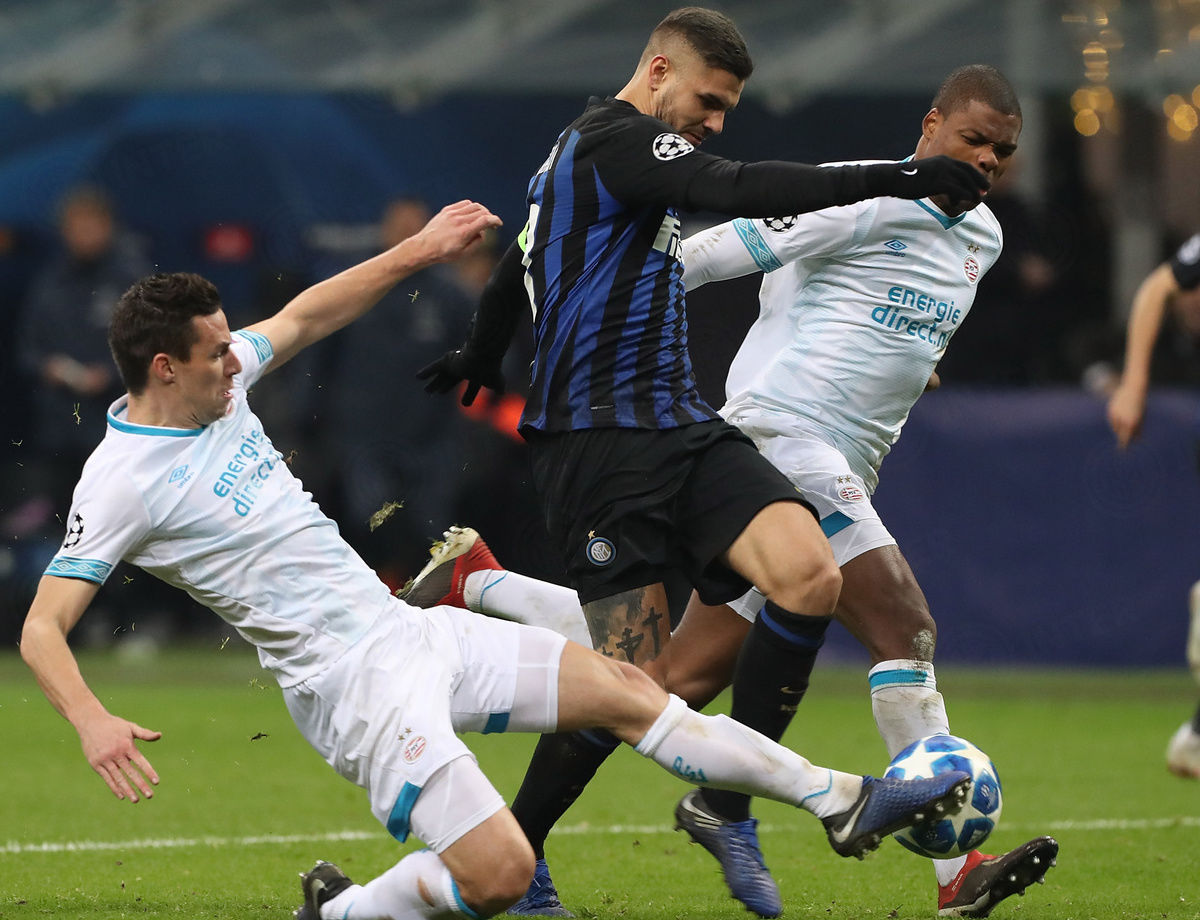 The Nerazzurri's captain brought his side level after Lozano's opener, but Inter ultimately finish third in Group B behind Barcelona and Tottenham

MILAN - Our journey in the Champions League came to an end against PSV on Tuesday evening, as Inter pushed right up until the very end but were ultimately unable to reach the last 16.

We started the match extremely strongly, with Asamoah firing in a dangerous cross in the fourth minute before Perisic then headed onto Zoet’s post soon after. It was then D’Ambrosio who had a chance, as the full-back just missed the target with a header. However, the Nerazzurri were stopped in their tracks come the 13th minute, as Bergwin capitalised on a lost ball from Asamoah and teed up Lozano to head home at the back post. With Inter still unsettled, Handanovic was then on hand to keep out a good chance from De Jong in the following stages. The home side soon composed themselves and Politano played in Mauro Icardi for his first sniff of goal in the 21st minute, although the Captain could only head over. As the first half came to a close, Bergwin first forced Handanovic into a stinging save in the 37th minute, as the Slovenian shot-stopper turned the ball out for a corner. The teams then headed into the break, with the Nerazzurri well aware that a response was duly needed after the interval.

The second half began with a miraculous save from Zoet, who managed to deny Icardi following Borja Valero’s lovely through ball. The miss affected Inter, who struggled to find any rhythm up front for a good few minutes after that. A superb challenge from Skriniar then sparked a quick counter-attack as the San Siro crowd roared the team forward. It ended with Zoet pushing Politano’s strike out for a corner. Life had been breathed into Inter: following this, Keita whipped the ball in for Icardi, who then knocked it down for Borja Valero. The Spaniard’s shot was too weak to really trouble PSV’s goal, however.  Keita was causing the away side problems, but he couldn’t beat Zoet from outside the area after breaking free from  an opposition player. The Dutch side’s goal was leading a charmed life: a shot from Icardi was deflected behind for a corner, before PSV’s no. 1 comfortably saved De Vrij’s effort. Spalletti then tried to shake things up by bringing on Lautaro Martinez, with Perisic being moved to full-back. The team responded: Politano’s magnificent cross was met by Icardi at the far post and Inter were level. But a draw wasn’t going to be sufficient: Inter had no option but to push for the win, although they were quite wayward in their attempts to find a second goal. Keita had a good effort following Perisic’s assist, but it wasn’t enough to find the back of the net. The Nerazzurri then had a final chance to win it, but Lautaro headed over from close range. Thanks to Tottenham’s draw at Camp Nou, Inter will have to settle for a place in the Europa League.

Next
Politano: "We're disappointed but we must pick ourselves up straight away"