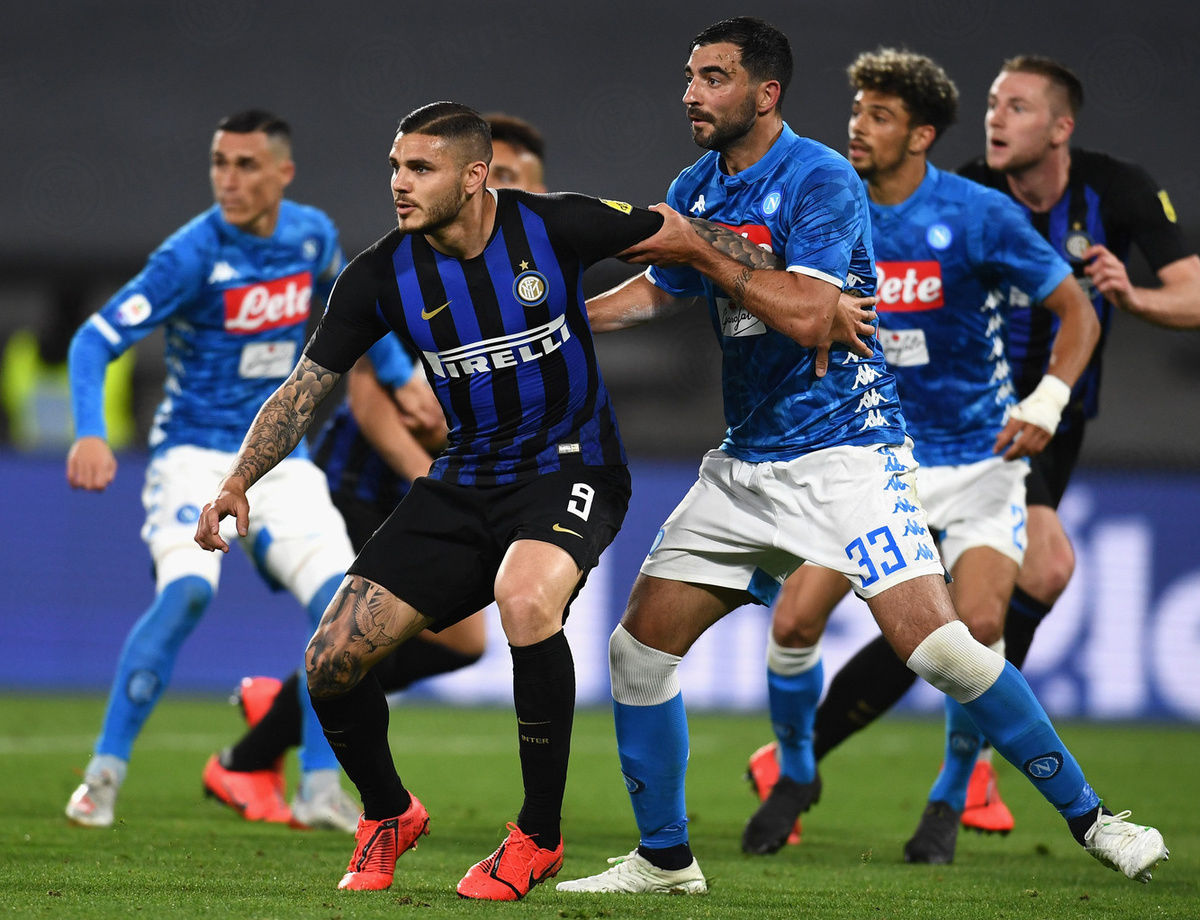 INTER HEAVILY BEATEN AT NAPOLI, 4-1 AT THE SAN PAOLO

NAPLES- It was a terrible night as Inter went down 4-1 to Napoli on matchday 37 in Serie A TIM at the San Paolo. The result places Luciano Spalletti’s side in fourth on 66 points, level on points with Atalanta but they lead on the head-to-head record. Inter have a one-point lead over AC Milan and a three-point lead over Roma with one match left.

The home side had the first chance of the match in the third minute when Malcuit crossed it for Mertens who fired over from a good position. In the 12th minute, Milit got away at the edge of the Inter box before letting fly with a powerful if inaccurate left-foot strike. Soon after, Inter were on the attack but Lautaro’s shot was blocked and it allowed Karnezis to make a simple save. After 15 minutes, Napoli opened the scoring and all the credit went to Zielinski after he beat Handanovic with an unstoppable shot from about 20 metres out. The Nerazzurri looked to respond straight after with Politano finding Perisic in the area on 18 minutes but the Croatian couldn’t keep the shot down. In the 26th minute, Ghoulam was set up by Fabian Ruiz but he couldn’t keep his left-foot strike on target. Inter had a good chance in the 31st minute through Nainggolan but he opted to play it to Perisic rather than shoot and Albiol was able to clear. Spalletti’s side finished the second half with some momentum. In the 37th minute, Lautaro forced Karnezis to save with his feet after a shot from the edge of the area. In the 40th minute, Nainggolan hit the ball hard but wide. The last chance of the half was for Callejon as the Spaniard controlled the ball and fired with his right but he closed the angle too much and Napoli went into the break 1-0 up.

During the half-time break, Spalletti brought on Icardi in Politano’s place and switched to a 3-5-2 formation. In the 52nd minute, the Nerazzurri had numbers over on the counter, but Albiol managed to get in the way of Lautaro’s final attempt. There was a similar situation at the other end three minutes later, with Miranda doing well to deny Mertens. Spalletti made his second change with 58 minutes on the clock: Gagliardini was replaced by Vecino. However, Napoli quickly went on to double their lead as Merten’s header beat Handanovic following Callejon’s cross in the final third. Inter looked to respond, with Karnezis just getting to the ball ahead of Lautaro in the 67th minute after D’Ambrosio had met the ball on the volley. Following this, a miraculous goalline clearance from Koulibaly stopped Lautaro pulling one back as Inter continued to look for a way back into the match. However, they were struck another blow as the Partenopei scored a third shortly afterwards: Fabian Ruiz converted Malcuit’s ball across the box after Handanovic had initially kept out Milik’s effort. It was made even clearer that it wasn’t going to be Inter’s night as Lautaro hit the bar with his right foot on the 74-minute mark. In the 78th minute, Karnezis dived to save Icardi’s header before Napoli’s fourth promptly came about, once again through Fabian Ruiz. The Spaniard received the ball in the box from Mertens and fired home with his left foot. With Candreva on for Perisic, the Nerazzurri were awarded a penalty after Icardi was brought down by Albiol in the box. The Argentine striker then stepped up to score and pull one back for the away side. There were then further chances as the match was drawing to a close: Karnezis stood firm to deny Candreva before Insigne (who had come on in Milik’s place) skimmed the bar with a right-footed effort on the turn. There were no further goals in the three minutes added on by the referee: Napoli emerged 4-1 winners.

In the final match of the season, the Nerazzurri can’t afford to get it wrong: next week at San Siro (the date and time of the game is yet to be confirmed), Spalletti’s men will face Empoli as they look to secure their spot in next season’s Champions League.
#ForzaInter forever!

Next
Spalletti: "That was ugly but it's still all in our hands"