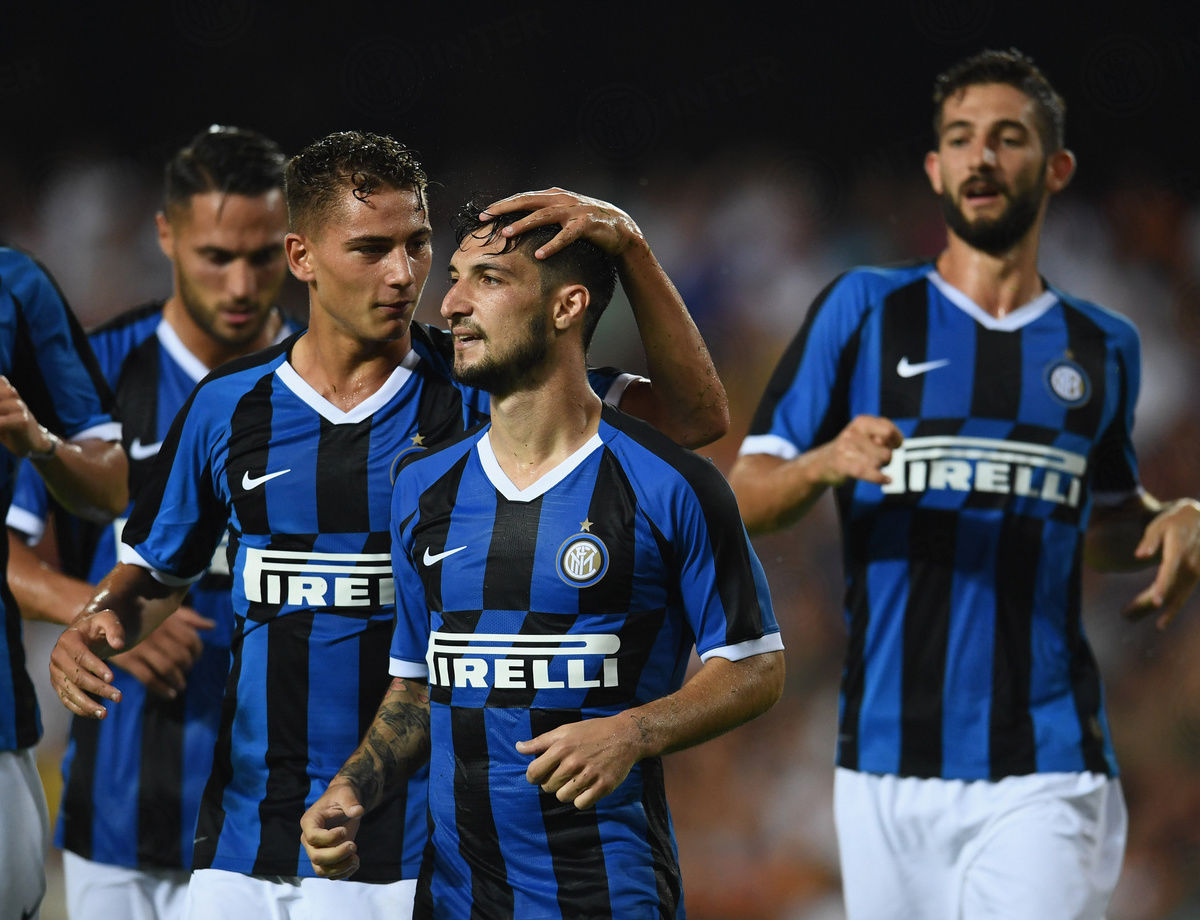 INTER DEFEAT VALENCIA ON PENALTIES AND WIN THE TROFEO NARANJA

1-1 after 90 minutes with goals from Soler and Politano, then Bastoni with the winning penalty

VALENCIA - The final international leg of the Inter Summer Tour 2019 was concluded with a victory on penalties for Inter after the match against Valencia finished 1-1 after 90 minutes. This crowned Inter as the winners of the bwin Naranja Trophy, a historic summer competition for the Spanish team that celebrates its centenary in 2019. The Nerazzurri then came out on top on penalties, with the winner calmly slotted in by Bastoni. The goals during the match came from Soler in the first half and Politano in the second, who scored a penalty won by Esposito.

With La Liga starting next weekend, the Spanish team were ahead in their preparations. This was apparent in the opening minutes, as Marcelino’s side started with pace, looking to up the intensity right from the off. Antonio Conte stayed true to the tactical line-up with which he has faced all of the Nerazzurri’s matches this summer, this time with Lautaro Martinez partnering Matteo Politano upfront.

The first attack came from Valencia, who were relentless down the left flank for the entire first half. Soler was the most lively from the hosts, finding gaps between the lines and causing trouble for the Inter defence. Handanovic came up strong in the 12th minute, doing well to stop Gameiro's shot from close range. Inter tried to ease the pressure with a few counter-attacks, but Handanovic was called upon once more after 29 minutes with a good save. However there was nothing he could do in the 38th minute, as Guedes found the space to put in a great cross, finding Soler free in the box to head home past our number 1, putting Valencia 1-0 up.

In the second half former Nerazzurri Kondogbia came into the spotlight with his shot parried by Handanovic. First D'Ambrosio and then Dalbert did well in shutting down the threats from Valencia, who once more started the half strongly. In the 62nd minute it was Gameiro's turn, with a shot from outside the box forcing a save from Handanovic. After 67 minutes came the Nerazzurri reply, with Lautaro, freeing himself well and shooting from distance, only just kept out by Cillessen. In the 81st minute, Esposito, who had just come on as a substitute, paved the way for a Nerazzurri draw: he danced into the area where he was struck down by Cheryshev, resulting in what was a stonewall penalty after some stellar play. Politano kept his cool from the spot and sent Cillessen the wrong way: 1-1. Changes from both sides and the spaces opened up by the closing moments left us with final minutes full of opportunities: first an effort from Vecino, then in the 90th minute a heroic clearance from De Vrij off the line, keeping Cheryshev out after he had already rounded Handanovic. In the third minute of added time, after Dimarco's left-footed effort which sailed just over, the referee blew the whistle and the game went to a penalty shoot-out.

The first ten spot kicks were flawless, with the shoot-out progressing to a nail-biting sudden death. With the 14th penalty, after Garay's miss, Bastoni sent Cillessen the wrong way and slotted home, winning Inter the Trofeo Naranja bwin.

Next
Valencia defeated on penalties: the photos from the Trofeo Naranja

Bastoni: “An important win, both for the table and our morale”

Choose your MVP from Inter vs. Torino!

Headers and 19 goalscorers this season: Inter vs. Torino, all you need to know