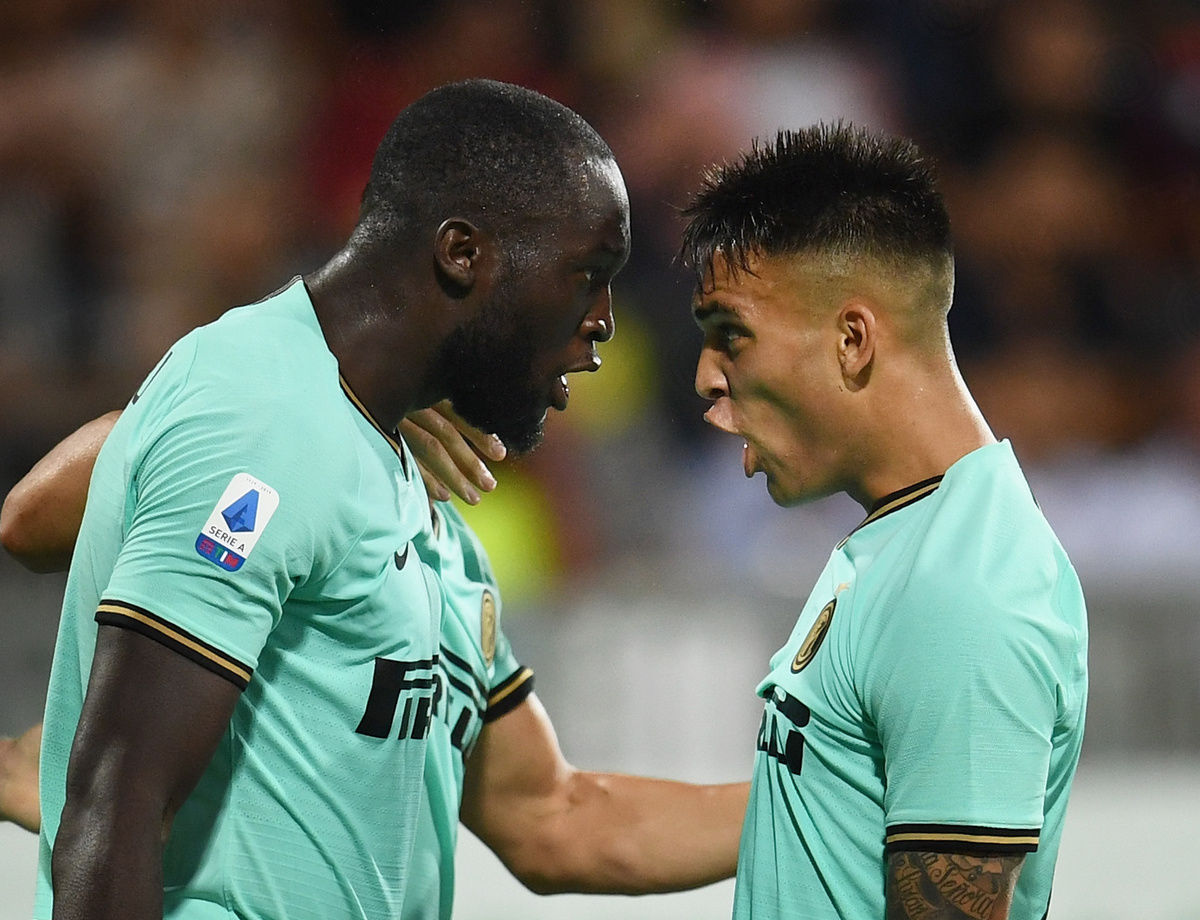 Antonio Conte's Nerazzurri win 2-1 at the Sardegna Arena: two wins in the first two games of the league

CAGLIARI – Mission complete for Antonio Conte’s Inter side, who have maximum points as we head into the first international break of the season: after their home victory over Lecce, Inter defeated Cagliari away thanks to Lautaro's goal and Lukaku's finish from the penalty spot (with Joao Pedro temporarily equalising for the home side), meaning the Nerazzurri now sit on six points in the league after the first two matchdays of the 2019/20 Serie A TIM season.

The opening moments of the match were lively, with former Inter player Radja Nainggolan looking to surprise Handanovic from distance. Thankfully, the ball sailed over the bar. In the eighth minute, Handanovic beat Joao Pedro to the ball after a dangerous cross into the box, before Olsen came out his area to deny Lautaro following D’Ambrosio’s ball over the top. There was a small break with 17 minutes on the clock, when VAR intervened to check whether Asamoah had handled in the box. Nothing doing, however, as the ball had clearly come off his chest. Ten minutes passed before the Nerazzurri broke the deadlock: Lautaro got on the end of Sensi’s left-wing cross and diverted the ball past Olsen. After a VAR check, the goal was given. The Sardinians tried to react immediately through Joao Pedro’s header, but the ball ended up out of play. In the 41st minute, the home side came inches away from drawing level: Joao Pedro found Cerri who shot just wide from inside the box. The Nerazzurri thus went into the break one to the good after three minutes of added time.

The hosts came back out for the second half with a renewed lease of life and after just a few minutes they were back level: in the 50th minute Nandez burst down the right and crossed into the middle, finding Joao Pedro whose header beat Handanovic. Inter then pushed back: after 56 minutes Brozovic played it to Sensi in the air who chested it down well and shot with his right, forcing a big save from Olsen to keep it out of the net. In the 60th minute it was our number 12 once more who both won and took a free kick on the edge of the box: Olsen was beaten but the ball thumped against the crossbar and went out for a goal kick. In the 69th minute Conte brought on the man for whom this match meant everything, former Cagliari player Barella, coming on for Vecino. Almost immediately afterwards, Lukaku played it through to Sensi who burst into the box, beating Pisacane with a sublime roulette before being brought down: a clear penalty, which the Belgian himself converted, making no mistake to put Inter back in front. With the lead restored, Conte felt the need to inject fresh legs and energy into the side, bringing on Politano and Godin for his debut, who replaced Lautaro and Candreva respectively. Lukaku had a fantastic chance to seal a personal double in the 83rd minute of the game but, after an inch-perfect cross from Politano, he placed his right-footed shot just wide from mere yards out. The two Nerazzurri forwards combined well once more in the 90th minute, as Lukaku’s flicked header played Politano through; the winger burst into the area and struck with his left, kept out only by a strong save from Olsen. With five minutes of stoppage time signalled, Politano was still looking lively, and set free by Sensi, his break through was shut down smartly by a joint effort from Olsen and Ceppitelli. This was the last action before the final whistle blew, Inter securing a 2-1 win which was well-deserved after a strong performance at the Sardegna Arena.

Now the team disperses for the international break before returning to San Siro against Udinese on the weekend of 14-15 September, and then once more against Slavia Prague for their debut in the Champions League this season, scheduled for Tuesday 17 September.

Next
Conte: "A win that gives us a confidence and morale boost"

Lukaku: "Playing for Inter was always my dream"