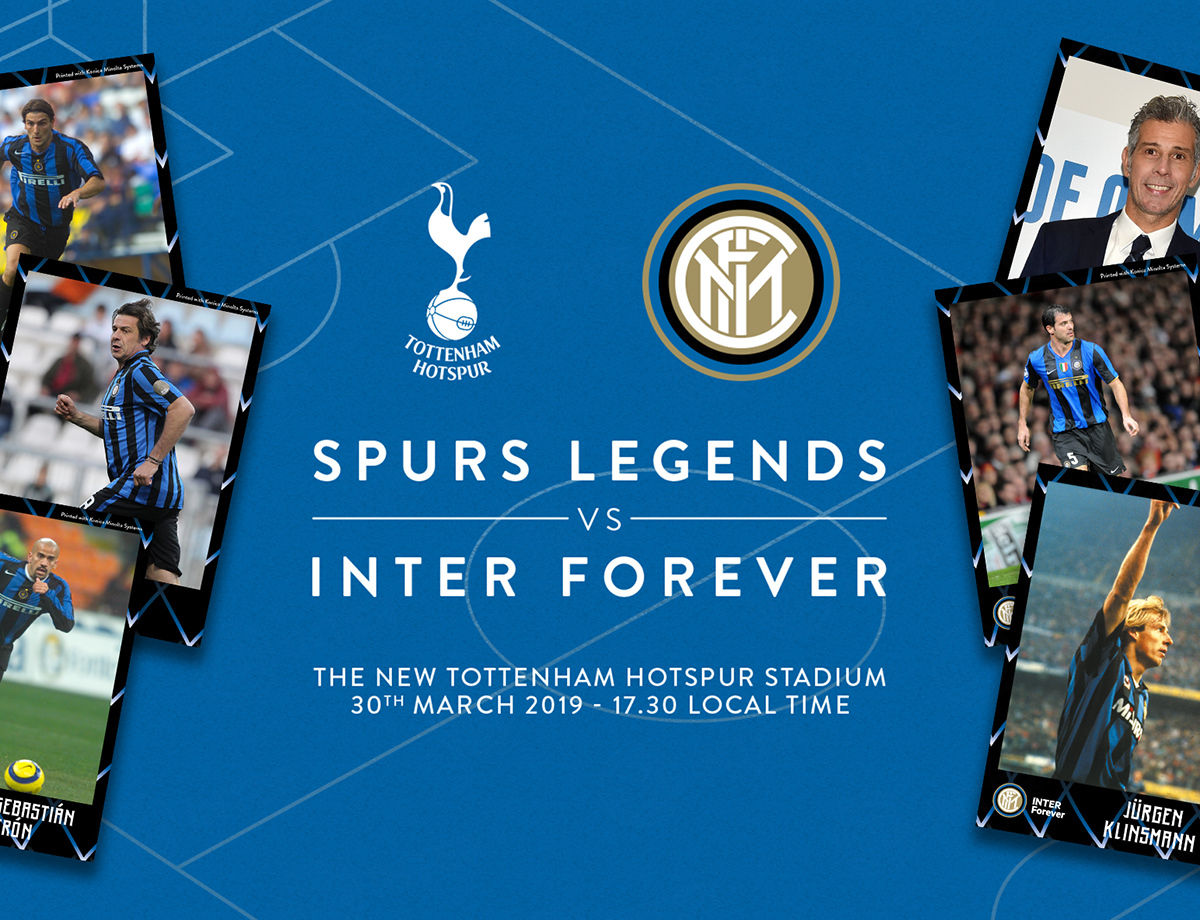 SPURS LEGENDS VS. INTER FOREVER: THE MATCHDAY SQUAD AND HOW TO WATCH THE GAME

On Saturday 30 March at 18:30 CET, the second of the two test matches to launch Tottenham's new stadium will take place

MILAN- ‘Feel how fast my heart is beating’. The flight from Milan to London was booked and his bags were packed. However, it was much rather a ‘see you soon’ than a goodbye. 8 January 1998 was the day that Nicola Berti said arrivederci to his Nerazzurri teammates and sealed his switch to White Hart Lane – awaiting a new adventure with Tottenham Hotspur. It was impossible not to be emotional after spending his entire career with Inter. The trip was organised by a friend: Jurgen Klinsmann. He himself had picked up the phone and suggested signing Berti to the Spurs chairman. He then advised his former Nerazzurri teammate: “Leave, you won’t regret it”.

Now, 20 years later, Berti will be back on the same flight. However, this time he won’t be travelling to London in the Nerazzurri colours, and he won’t be alone. He won’t be heading to the old White Hart Lane either, but the common denominator will still be Tottenham.

Spurs Legends vs. Inter Forever, on Saturday 30 March at 17:30 local time (18:30 CET), will be one of two test matches that will launch Tottenham’s new stadium – The New Tottenham Hotspur Stadium. The match will be streamed live on Inter TV, Sky Calcio and on Inter’s Facebook page – only for those connected from Italy. Alongside Nicola Berti, there will also be a number of former Nerazzurri champions who’ve been called up by Head of the Inter Forever project Francesco Toldo, who be the Nerazzurri’s coach on this occasion.

It will be a real combination of past, present and future. The Tottenham and Inter legends will be launching the most modern stadium in the world. Every player has a particular link to Inter and, even as opponents, also to the English team.

As for Inter Forever, here is the squad that will face Spurs Legends:

GOALKEEPERS
Julio Cesar and Luca Castellazzi will be the pair to protect our goal in London, who previously both played against Tottenham in the 2010-2011 Champions League campaign. The Acchiappasogni was in goal for Inter’s 4-3 at San Siro, during which Gareth Bale bagged a hat-trick. Meanwhile, Castellazzi played in the return leg at White Hart Lane.

DEFENDERS
As usual, our vice-president Javier Zanetti will be in the backline for the Forever team coached by Toldo. During his professional playing days, ‘Pupi’ came up against Tottenham four times: he faced them twice in the Champions League and twice in the Europa League, also scoring against them at San Siro. Laurent Blanc will also be there alongside him in defence. The former French defender, who will be playing for the Forever side for the very first time, came up against Spurs in the Premier League during a two-year spell at Manchester United. Inter Forever’s match against Spurs Legends will see Blanc team up with former teammate Mikaël Silvestre again. The latter spent nine years with the Red Devils, winning five Premier League titles and the Champions League once over this period. He then moved to Arsenal, where he got to experience the North London Derby against Tottenham. Completing the backline will be Fabio Galante, who won the 1998 UEFA Cup with Inter following the victory against Lazio in Paris, and Matteo Ferrari, another debutant for the Forever side.

MIDFIELDERS
Having played for both the Nerazzurri and Spurs during his playing days, Nicola Berti will no doubt be one of the most popular players on the pitch (perhaps the chant that was once sung about him following his arrival in London will be heard again) as part of a high-quality Inter Forever midfield. Dejan Stankovic, who scored in the Nerazzurri’s 4-3 win in autumn 2010 and who never likes to lose, will play, as will Juan Sebastian Veron. It’ll be a pleasure to see the Argentine back out on the pitch, with fellow former Premier League players Ousmane Dabo and Giorgios Karagounis also set to join him on the turf. Completing the midfield will be Houssine Kharja, who lifted the 2011 Coppa Italia with the Nerazzurri.

FORWARDS
Jürgen Klinsmann who lined up for both sides during will lead the line for Inter Forever. The German won the SuperCoppa Italiana and UEFA Cup with the Nerazzurri, while he scored plenty of goals for Spurs over two different spells. Benito Carbone, Nicola Ventola and David Suazo are the other strikers in the squad. Carbone spent a long period in England and was a frequent goalscorer against Tottenham while playing for Sheffield Wednesday, Aston Villa and Bradford. Ventola got a taste for the Premier League while on Crystal Palace’s books, while David Suazo is the top goalscorer for Inter Forever with nine goals in ten appearances.

Next
InterNationals: Miranda and Asamoah both in action

InterNationals | 7 Nerazzurri involved with Bastoni, Dzeko and Calhanoglu among the goals

InterNationals | Goals for Calhanoglu and Dumfries